Get 1% rebate on your purchases above RM100!
Lalamove Delivery
only available when you add / save your address!
Add Now!
Cart: 0
Cart 0

id you know gases are added to many food packages and not all packages have the same gases? The empty space in food packages is often filled with gas other than air. Food companies will remove the air in that space and replace it with another gas.

When they do this, it is said that the atmosphere of the package has been modified. In this article, we will see why gases are used in packaging, the different gases or mixture of gases used, and what they are used for.

Modified atmosphere packaging, also known as MAP, is replacing the air, mainly oxygen, inside a package with a specific gas or mixture of gases to protect food and slow down the spoilage of food. Spoilage occurs from one or more of the following: 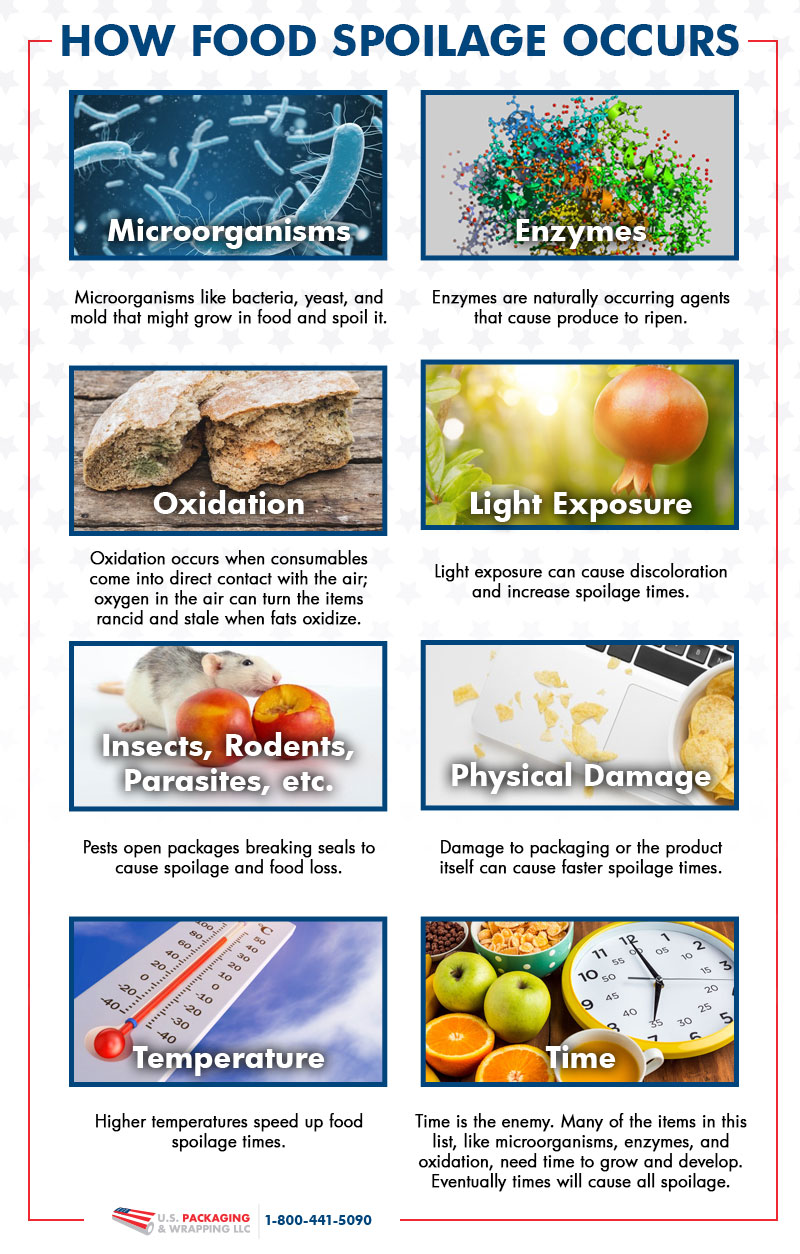 Enzymes: Enzymes are naturally occurring agents that cause produce to ripen. To a certain extent, enzymes are desirable to bring fruits and vegetables to the best state for consumption.

Oxidation: Oxidation occurs when consumables come into direct contact with the air; oxygen in the air can turn the items rancid and stale when fats oxidize. Oxidation can also cause off coloration of foods.

Light exposure: The gases themselves do not necessarily help protect from light, but the packaging used in combination with the gases can help with light exposure reduction if beneficial.

Insects, rodents, parasites, etc.: This is another category that gases do not offer direct protection against, but then again, the gases working in conjunction with the packaging can create a barrier that keeps the smell of edible items from pests.

Physical Damage: An example of a modified atmosphere packaging gas used to help prevent physical damage is the nitrogen found in potato chips bags. As we will see, it has other uses, but it also works as a cushion against the crushing weight from other bags and boxes when being transported.

Temperature: Higher temperatures speed food spoilage. Coming back to the potato chips bag, the nitrogen in the bag also works well with the bag's multi-ply construction to regulate temperature. The interior foil lining works first as an oxygen shield and also as a temperature barrier.

Time: Time is the enemy. Many of the items in this list, like microorganisms, enzymes, and oxidation, need time to grow and develop. The modified atmosphere packaging gases fight this enemy by inhibiting enzymes and microorganisms' growth, buying the food some much-needed time. How Food Spoils | UNL Food. 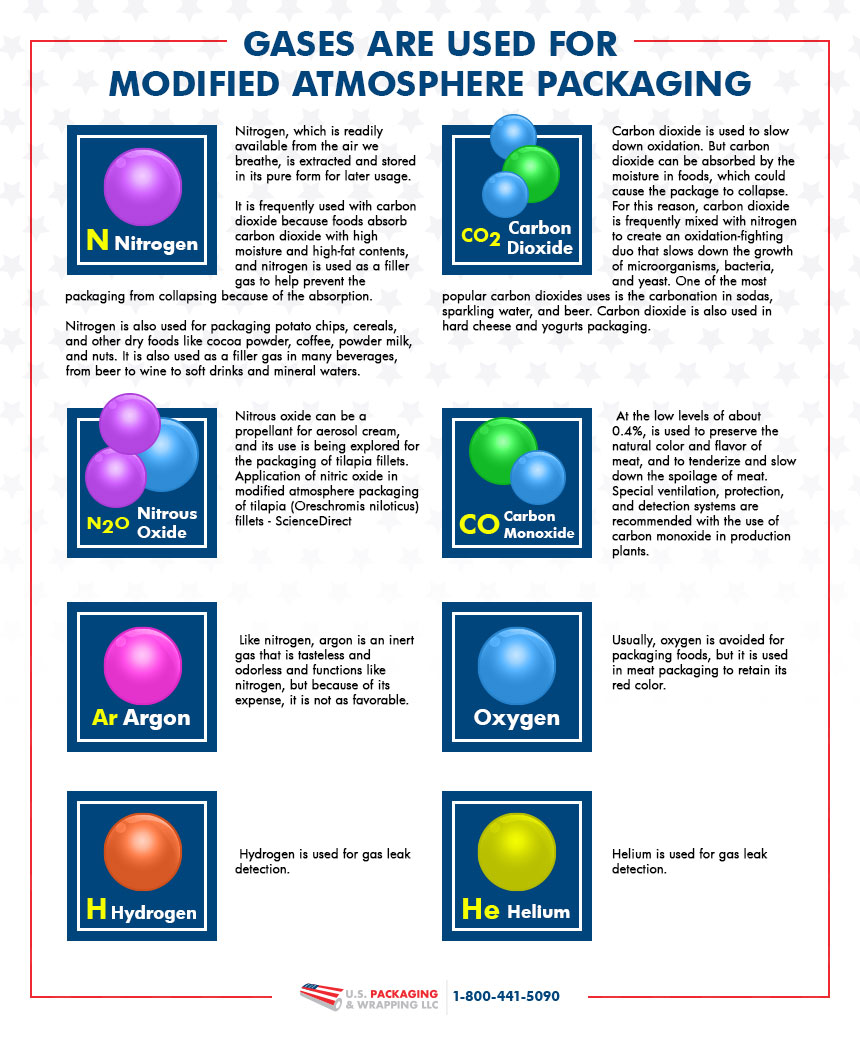 To help fight food spoilage, producers have been employing gases on packages. While different gases are used with other foods, the aim is to increase food preservation. Together with the packaging, they are in, these food-grade gases can help preserve against one or more of the threats that can spoil food. Some of the gases that are most frequently used are those abundantly found in our atmosphere. The atmosphere, the air that we breathe, is mostly composed of nitrogen (78%), oxygen (21%), and argon (0.9%), with the remaining (0.1%) made up of carbon dioxide, nitrous oxide, methane, ozone, and other trace gases. Composition of the Atmosphere | North Carolina Climate Office (ncsu.edu)

Here are some of the gases used in some food packaging and modified atmosphere packaging:

Nitrogen (N2): Nitrogen, which is readily available from the air we breathe, is extracted and stored in its pure form for later usage.

It is a tasteless and odorless inert gas used to displace air and as a filler gas when mixed with other packaging gases. It is frequently used with carbon dioxide because foods absorb carbon dioxide with high moisture and high-fat contents, and nitrogen is used as a filler gas to help prevent the packaging from collapsing because of the absorption.

Nitrogen is also used for packaging potato chips, cereals, and other dry foods like cocoa powder, coffee, powder milk, and nuts. It is also used as a filler gas in many beverages, from beer to wine to soft drinks and mineral waters.

Carbon monoxide (CO):  Is colorless, odorless, tasteless, toxic, and flammable. Its usage is not allowed everywhere and is not without its controversy Low-Oxygen Packaging with CO: A Study in Food Politics That Warrants Peer Review (food-safety.com), but carbon monoxide, even at the low levels of about 0.4%, is used to preserve the natural color and flavor of meat, and to tenderize and slow down the spoilage of meat.  Low-Oxygen Packaging of Fresh Meat with Carbon Monoxide (meatscience.org)  Special ventilation, protection, and detection systems are recommended with the use of carbon monoxide in production plants.

Argon (Ar): Like nitrogen, argon is an inert gas that is tasteless and odorless and functions like nitrogen, but because of its expense, it is not as favorable.

Oxygen (O2): Usually, oxygen is avoided for packaging foods, but it is used in meat packaging to retain its red color.

As we have seen, by modifying the air in food packages with these gases, producers have successfully protected food and slowed down its spoilage. Some additional benefits of modified atmosphere packaging are the reduction of preservatives. Packaging food in MAP allows producers to sell their food with fewer artificial additives; thus, they can sell the product more naturally.

This is a win-win for producers and consumers. Modified atmosphere packaging also helps bring the overall cost down because the products last longer on the shelves, are better protected, and spoil less.

Which Gases are Used for Modified Atmosphere Packaging?
Jun 26, 21